So here we are, our first “official” IFA 2016 keynote, and it’s Sony! Let’s just jump into the beginning where Kazuro Hiari President of Sony came on stage.

Hirai showed a collage of images presenting how Sony’s future was looking dim, and how they have turned it round with the press, bringing them back into the profit. Kaz Hirai never seemed anything but optimistic about Sony in the entire event. There was never a waver in his voice. Like all good visionaries and leaders, Kaz believed what he said was true, and because of that, I started to too. 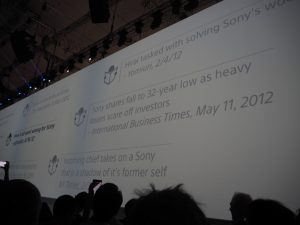 Hiari noted how we had started working towards a stronger, better Sony. Sony back in profit. Now they have profit, they can further innovate, and they really do mean innovate, as they’d continually told us throughout the event, Sony has no short list of “Firsts” in its history.

One of the odd things that Hirai kept saying (and I really wish he hadn’t kept saying it) is that Sony wanted its products to be at the last ‘one inch’, meaning they want to be in that last ‘one inch’ of your technology life, because they feel that is where it makes the most difference, when you get into smaller and smaller details, it becomes even more important to get them right, and Sony wants to make the last part just right.

They believe there’s a bigger future within consumer electronics. It’s refreshing that Sony weren’t afraid to talk about this, they know they’ve lost money, they know we know they lost money, and they didn’t want to sugarcoat it, they just said they’re going to try to fix it, which is all we can ask for.

Taking you on a nostalgia tour of Sony products, bringing back the Walkman and its first tape recorder. 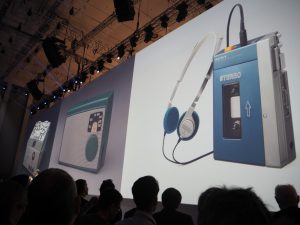 Sony announced the “Signature Series Walkman” this is a $3200 gold plated DAP (Digital Audio Player), along with ultra premium headphones (roughly $2000) and headphone amplifier (I didn’t ask because I didn’t want to get depressed that I couldn’t afford it after the other two.). It’s odd to me that Sony is launching another Walkman, not because it is a tarnished brand, far from it, and not because I don’t think Sony knows what to do with it, but because the MP3/DAP market has shrunk considerably in the last decade, mostly in the last half decade and those were models a fraction of the price of this. So Sony is really betting on not only its brand, but the Walkman brand to carry this. 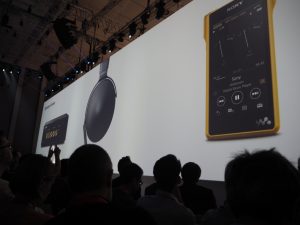 Optimised each component, with uncompromising high fidelity sound, They showed us this “Exploded view” of each of the three things, and by far the coolest was the Signature Series Walkman. 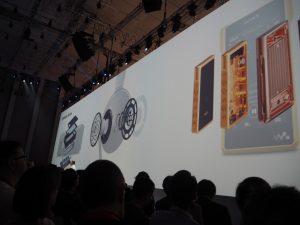 Goes on to say that each of these products can take you to a different world when experiencing them, meaning that you don’t hear what you think the artist wanted you to hear, you feel as if you are there with the artist, not that the Artist is with you, You are transported because the experience is so transcendental.

MDR-1000X wireless noise cancelling headphones, Clearly taking aim at the Bose Quiet Comfort QC35’s, these beautiful ANC (Active Noise Cancelling) headphones once again rely on an old Sony brand Staple, the MDR series, these are the MDR-1000X’s and Sony stated they wanted you to see and feel the “Artistic and emotional intention” Whatever that means. 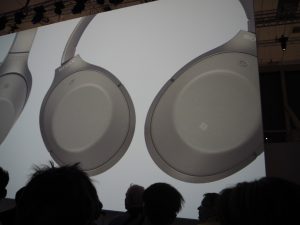 PlayStation platform heavily endorsed by consumers and evangelists alike, much to my surprise, Sony didn’t rag on about sales and just how much is was beating the Xbox One, which surprised me, because everything we’ve heard has pointed towards Sony just utterly destroying the Xbox One in terms of sales and customer satisfaction, Which once again proves how nice and somewhat humble Sony can be. They showed a slide stating that they had, to date sold 40 million units worldwide, which is, if you hadn’t guessed it,  a lot. 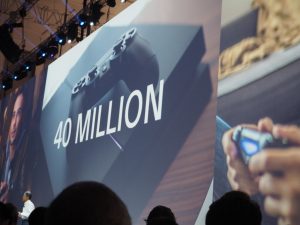 The PS4 is actually the  fastest selling console in PlayStation history, which is not much of a surprise after the Playstation 3, but beating out the PS2 and Playstation 1 is a big surprise to me and was not something I was expecting to hear. 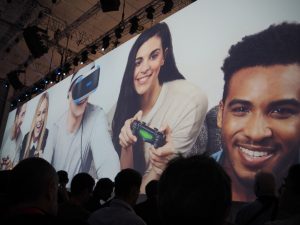 PlayStation VR, the Sony answer to the Oculus Rift and the HTC is going to be available next month. Doing their best to meet the high demand for pre-orders. Everyone that has tried the PSVR has said that the headset itself is by far the most comfortable out of the three main players, although the experience is nearly as high-end, which makes sense as the PS4 is nowhere near as powerful as the PCs used to drive the Rift and the Vive.

Seed Acceleration Program
The seed acceleration program is effectively an internal framework for Sony employees to present their ideas to the higher-ups, and if it’s good enough, will be green lit and brought to the forefront of their development regimes. Crowdfunding also plays a major part in this internal framework Sony has moulded, as it’s effectively an internal ‘Kickstarter’ for Sony employees. If it meets the relevant targets or a pledge goal, it will be a success and be used in the future.

The latest product – or more of a service – from this initiative is “First Flight”, which is an online platform providing an extensive suite of services from crowdfunding to e-commerce in Japan. First Flight is intended to deliver experiences that move people emotionally through innovation.

Sony FES Watch U
Strap adapts its look to the watch face style you have applied. Fully customisable with vastly different variations.

Merging fashion and technology – transforming the watch face and the strap. Toggle of a switch will change the entire look of the watch with known artists reportedly designing them. The FES-u watch Is something that I (Dom) am  torn on. Whilst I love the Idea of an E-Ink screen (I do wear a Pebble Time Steel after all) making the strap an E-Ink display seems an odd proposition to me, just one thing we’ll need to see more of in due course.

Enriching your personal space, transforming where you live and the products inside of it. That was the message Sony tried to pound into us at the event. Sony has been trying to peddle it’s “Life Space” wares for a couple of years now, and I think this years are the most interesting, if not also practical. First off we have the Glass Sound speaker (which launches in the UK Today. Given the name, you’d guess it was a speaker that integrated glass somehow into the design, you’d be correct, but Sony also included a rather dim LED filament light fitting into the centre, good for ambient light in the evenings maybe, but I doubt much else. 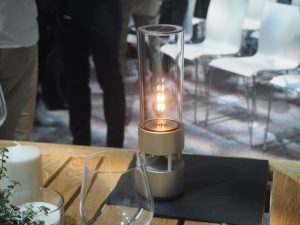 Myself and Dom had a tour of a Life Space UX-enabled room. Screen projection technology was insanely good with enriching user experience and fantastic clarity to the projected image.

They showed off an interactive ‘remote’, which controls the projector and the user interface without having to leave your sofa, or couch. Very much a work in progress, as there was a lady manipulating what the outcome of the remote’s intentions were, making the remote function effectively redundant for the time being.

A bulb speaker was also presented, much like the glassound speaker system but for a dining environments, taking on a slightly different design.

After Kazuro had finished waxing poetic about Life Space UX, he bought on Sony Mobile Executive VP Hideyuki Furumi  to speak about not only Mobile (So, Xperia phones) but also other rather interesting Xperia branded products, such as the Xperia Ear, a tiny Bluetooth mono earbud device with the Google Assistant built in. Sony is rolling out the Xperia Ear globally in November

The Xperia Ear works as an in-ear personal assistant, communication hands-free, eyes-free, enabling multitasking (Think something like the Moto Hint, or if you want to think cooler, the Virtual Assistant from “Her” Voiced by Scarlett Johannson). Sony noted the Xperia Ear’s “Natural voice and gesture interface” and that it had also included the technology that powers part of the Xperia Agent as well. You can listen to SMS messages in your ear, and reply by just nodding you head (gesture), this is just one of the cool gestures baked into the Ear by Sony and I can’t wait for it to be a “real” product that I can buy and test, because I (Dom) am one of those few people that still likes Bluetooth earpieces, as douche-y as they look, I hate holding phones to my ear, Sony makes me  feel like a Secret agent, I’ll go with Sony.

Creates new displaying an interactive touch screen, creating a shared experience. Powered by Android, easy access to Android Games, Play Store support was not mentioned, I’d assume it is not included, just because of the radically different User Interface paradigm to that of normal Android, but Sony may surprise us and have it included, letting you play all your android games, from Angry Birds to Modern Combat 5. 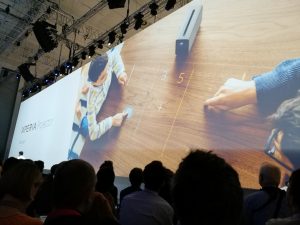 Partnering with Nestle Japan. In conjunction with Xperia Agent, triggering the Agent will let you make your coffee making experience that much better, because who doesn’t want a voice activated robot making you coffee in the morning? (seriously, who are you, because you’re weird) 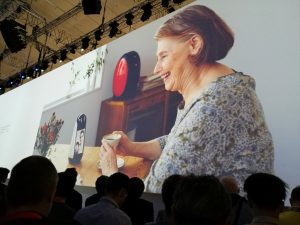 After the Agent, Ear and Projector, Sony moved onto what we all came here for, phones. Sony has launched the Xperia XZ, their flagship product for the new brand. The Xperia XZ takes the high points of the X Performance, namely build quality and, well, performance, and puts a better camera in, adds a new design (somewhat) USB-C and more. 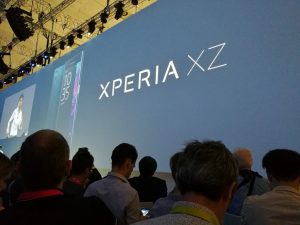 Designed with ergonomics in mind, curved around the edges with little chamfering. Inspired by the beauty of the nature. This seems somewhat gimmicky, like Samsung with its “Inspired by Nature” thought process, but nevertheless the small hands on time we had with the XZ (Soon to be remedied) showed that it was indeed very comfortable to hold. 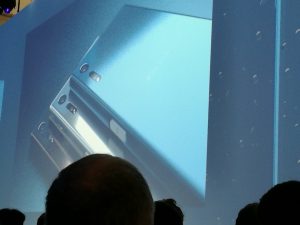 Sony said a lot of things about the XZ, so I’m just going to bullet point them here.

– Xperia X Compact device also announced (Nothing more to say on that, since Sony didn’t announce much of it) 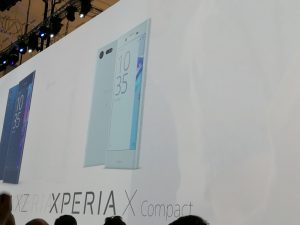