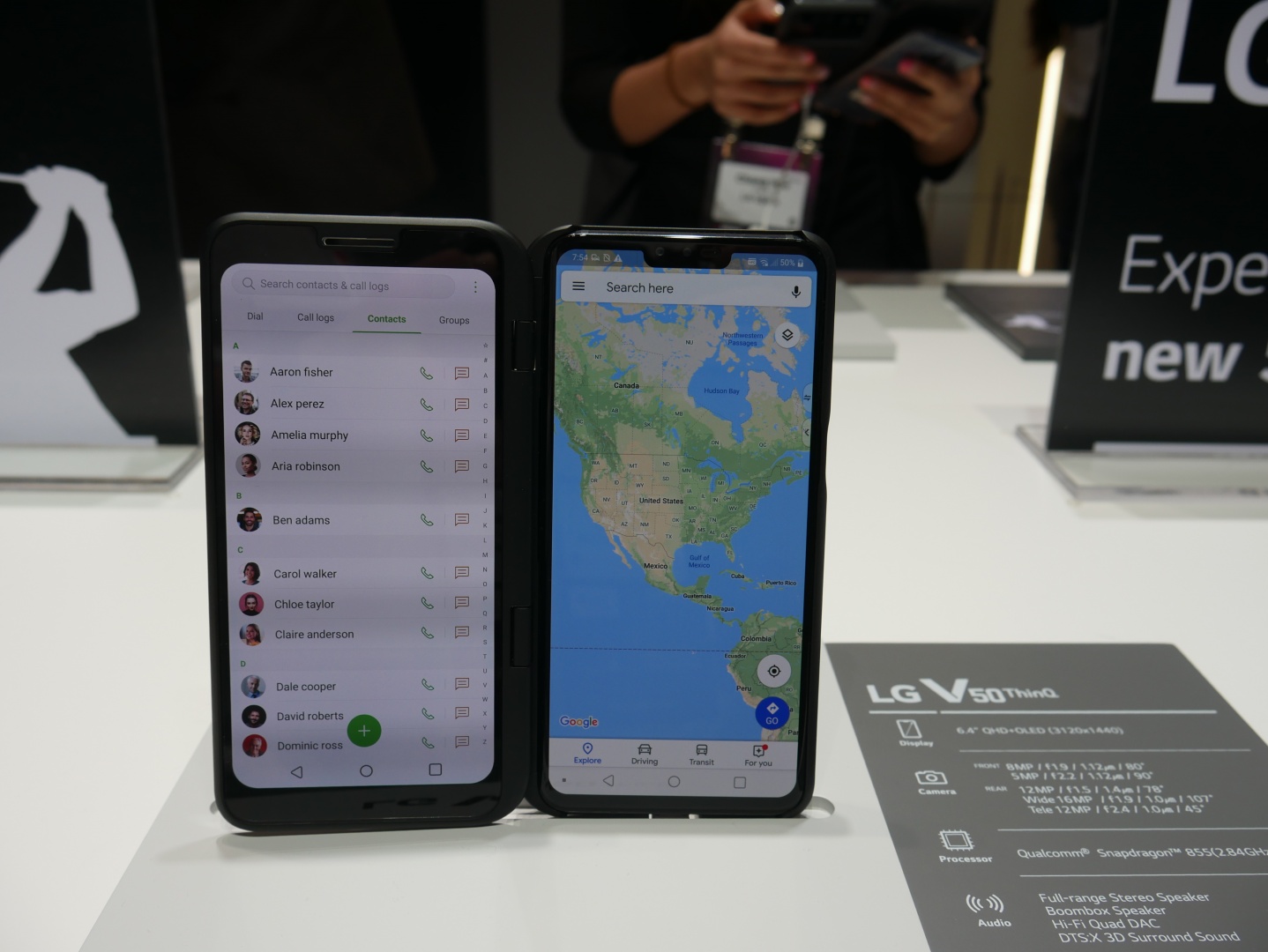 Starting off with the specs, this is a 2019 flagship, so it’s got a QHD+ OLED screen with a notch, it’s got a Snapdragon 855, it’s got 6GB of RAM and 128GB of storage which can be expanded by a MicroSD card and it’s got the whole crazy LG Camera setup that we’ve seen for a while, a 16mp wide-angle camera, a 12mp main camera and a 12mp 2x telephoto lens with an 8mp shooter up front. This time they’ve removed the camera bump and got it all under one piece of cover glass on the rear, Gorilla Glass 5. 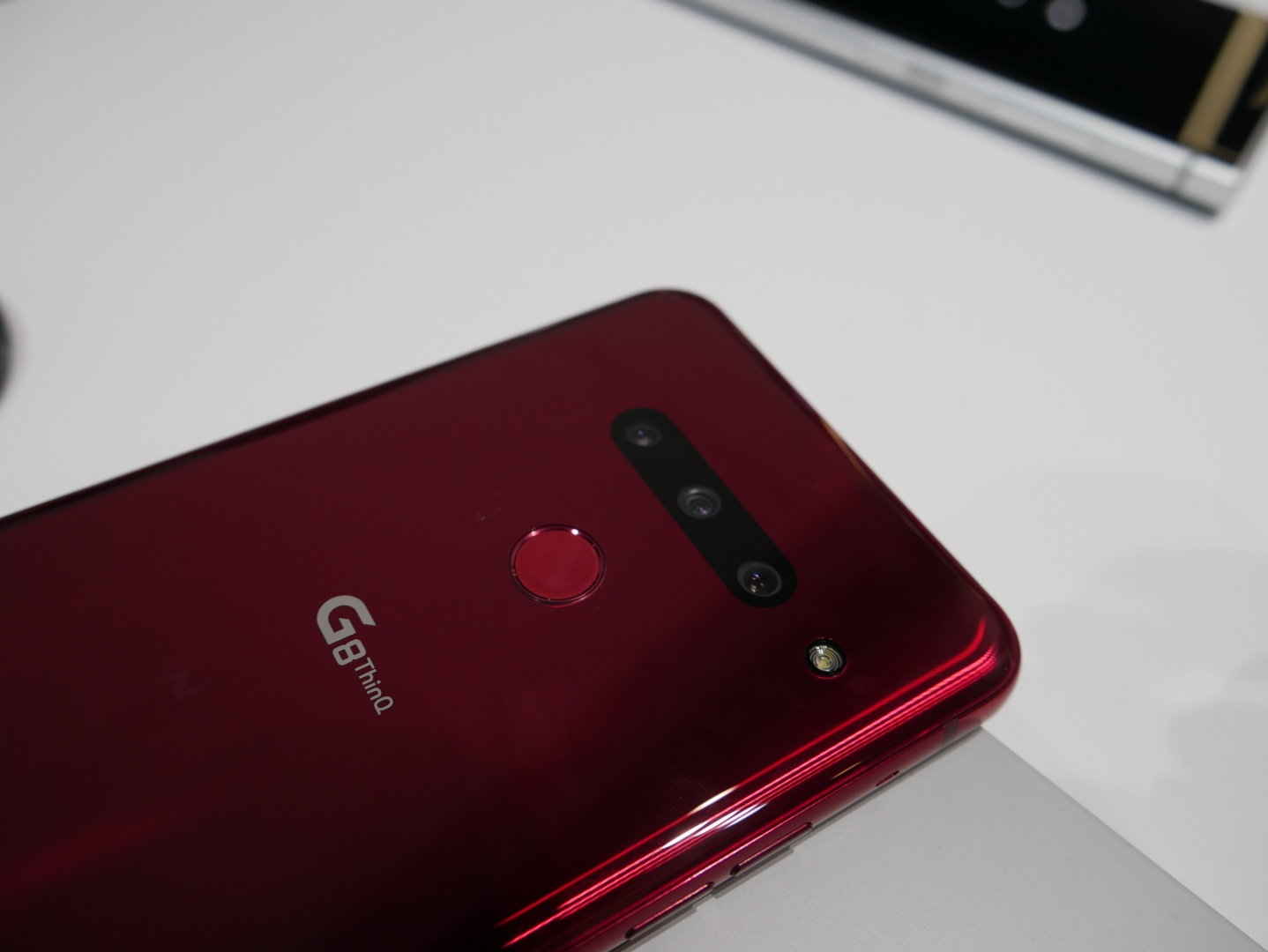 Then things get weird. Under the notch in the G8 sits 3 cameras; the main 8mp selfie shooter, but also two ToF (Time of Flight) cameras which enable some wizardry on the G8 that just smacks of reaching for something different rather than something good. It does do some cool stuff, but cool isn’t always the same as good, and I don’t think it is here. For example, one of the main features this ToF camera setup is used for is VeinID (or HandID, I’ve seen both used). Yes, VeinID (HandID) is exactly as it sounds. It measures the haemoglobin levels under the first few layers of skin and uses that individual pattern as a form of biometric authentication, and when it works it’s pretty cool, but it is weird. You have to hover your hand above the screen about 15-20cm and then wait for a second whilst it scans your hand. If it is a few centimetres too close, it’ll fail, the same as if it is a few centimetres too far away. The sweet spot was really quite small. The other feature the camera is being used for is gestures. Specifically, they keep showing off the volume control gesture. To change the volume you hover your hand over the screen to activate the sensors in a swiping move to choose what you wish to do and once you’ve selected volume, you clench your hand into a weird claw-like grip like you’re turning a large volume dial on an old Hi-Fi. Again, these things sound cool but it isn’t necessarily good.

Then we have the other weird thing, there is no earpiece on the G8. It uses the “Crystal Sound” tech from the LG TVs where it physically vibrates the OLED panel at a certain frequency whereby the screen itself becomes the earpiece. This is once again cool, but it isn’t quite as loud as a traditional earpiece, though it does have the ability to be put up to your cheekbone and used like bone conduction as Michael Fisher pointed out. 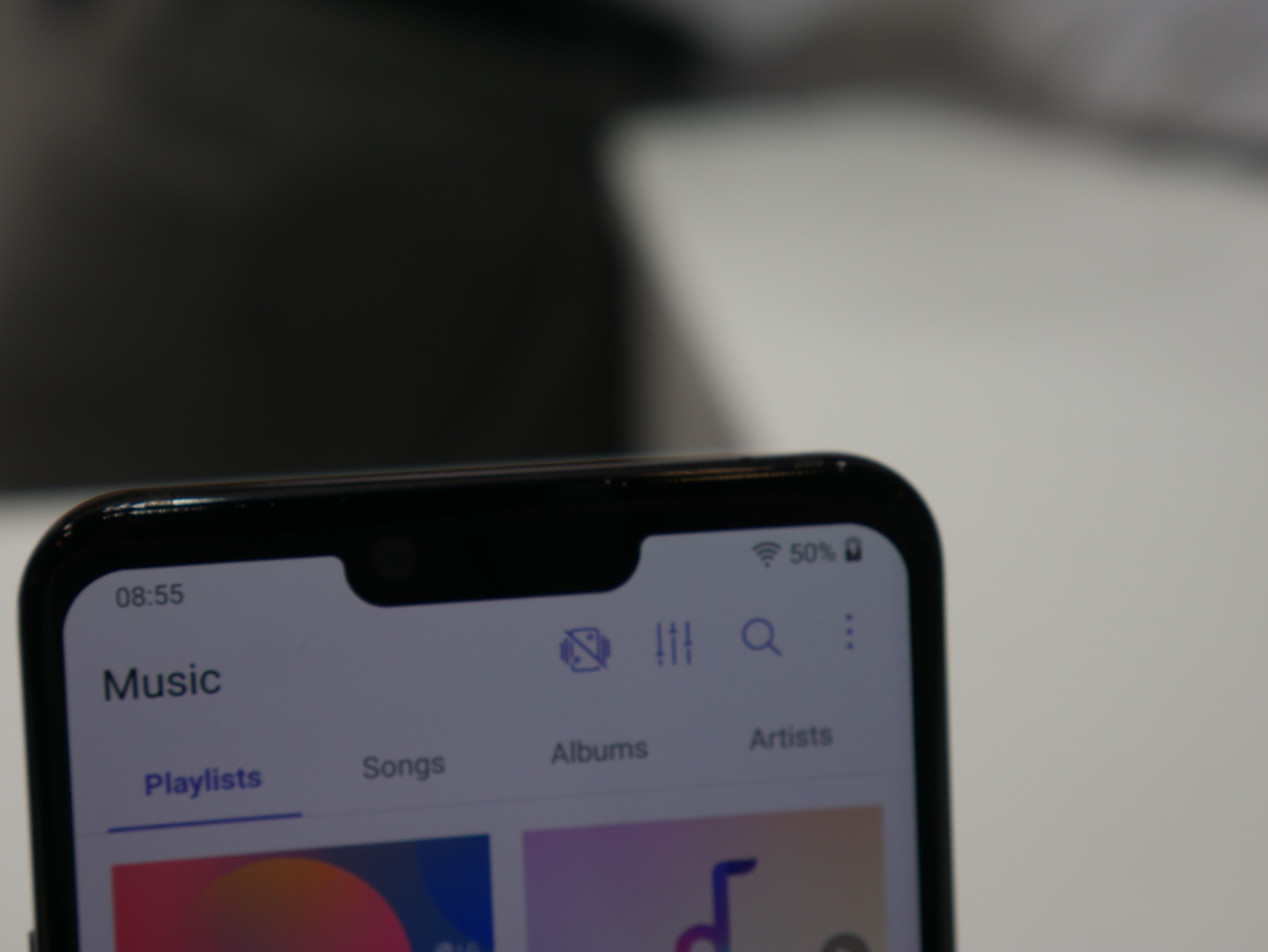 Next up we have the LG V50. This is a weird one too, as it’s honestly so close to the V40 that I’m surprised it even exists. The main differences I could find are that the battery has gone from 3300mAh to 4000mAh, the USB-C port has gone from USB 3.0 speeds (480mbps) to USB 3.1 Gen1 (5gbps), the Snapdragon 845 has been swapped out for a Snapdragon 855 and lastly, the rear glass got the same treatment of the G8 wherein the cameras are completely hidden beneath the glass, so no more hump. But as the V40 was only announced in October, that phone has been superseded in 4 months may come as a shock to some. LG does have previous here though with the V40 being released just 5 months after the V35, which came out 3 months after the V30S, which came only 7 months after the V30. This short generational lifespan could be considered absolutely ridiculous and makes it difficult for anybody to recommend buying a V series phone for longevity purposes. 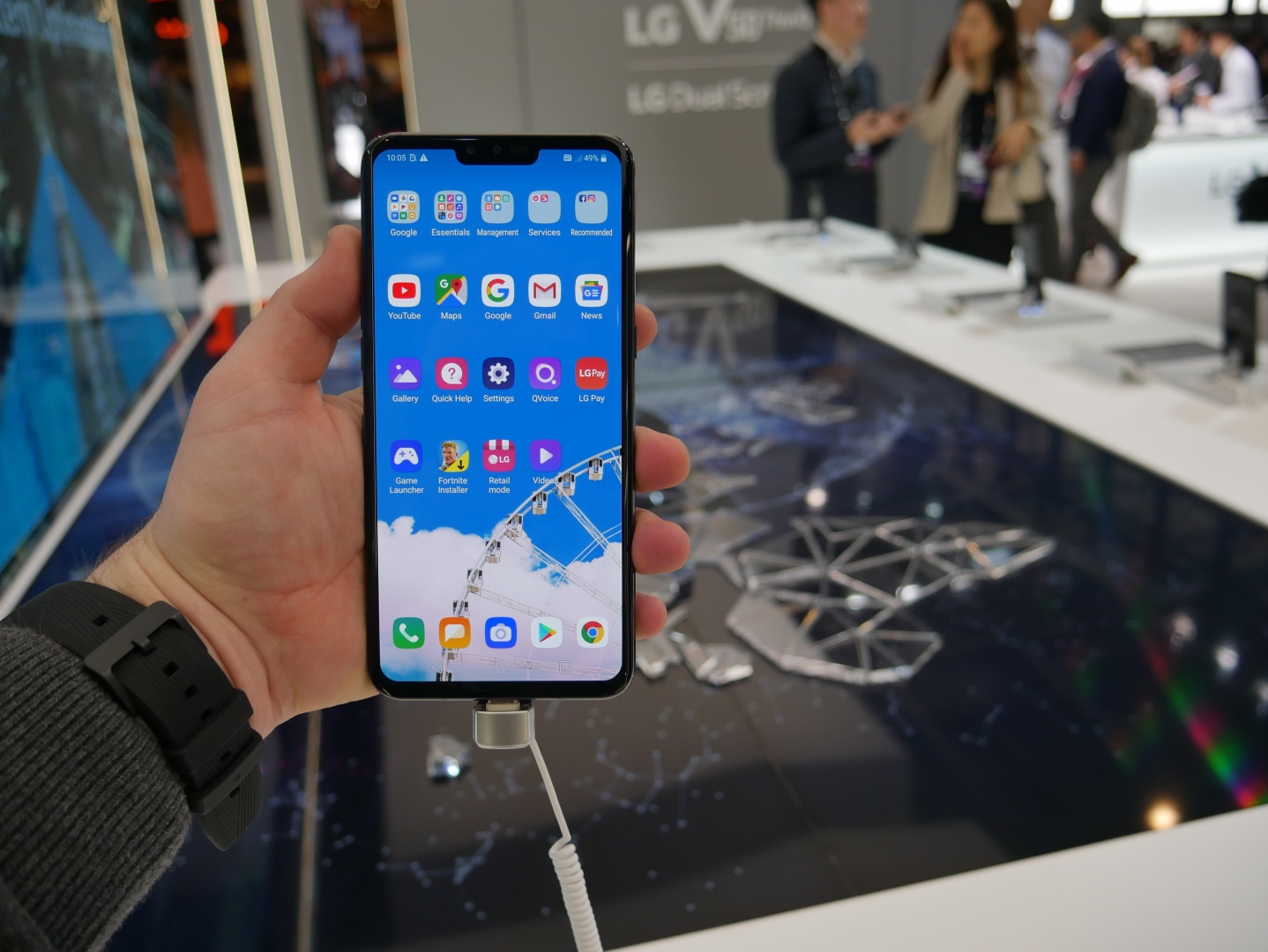 The weirdness with the V50 comes with its second screen attachment. Instead of making a purpose-built foldable device, or a dual screen device as we are seeing elsewhere, LG made what is essentially a case that just so happens to have a secondary, noticeably smaller, inferior quality screen in it. It’s still an OLED screen, but it is smaller at 6.2″ vs. 6.4”, and the colour temperature was incredibly off during my hands on also. The only positive I can is that the proprietary WiFi-based connection tech they’re using (likely some derivative of WiGig) had no detectable lag to it, which is great as that would have been the nail in the coffin for me. 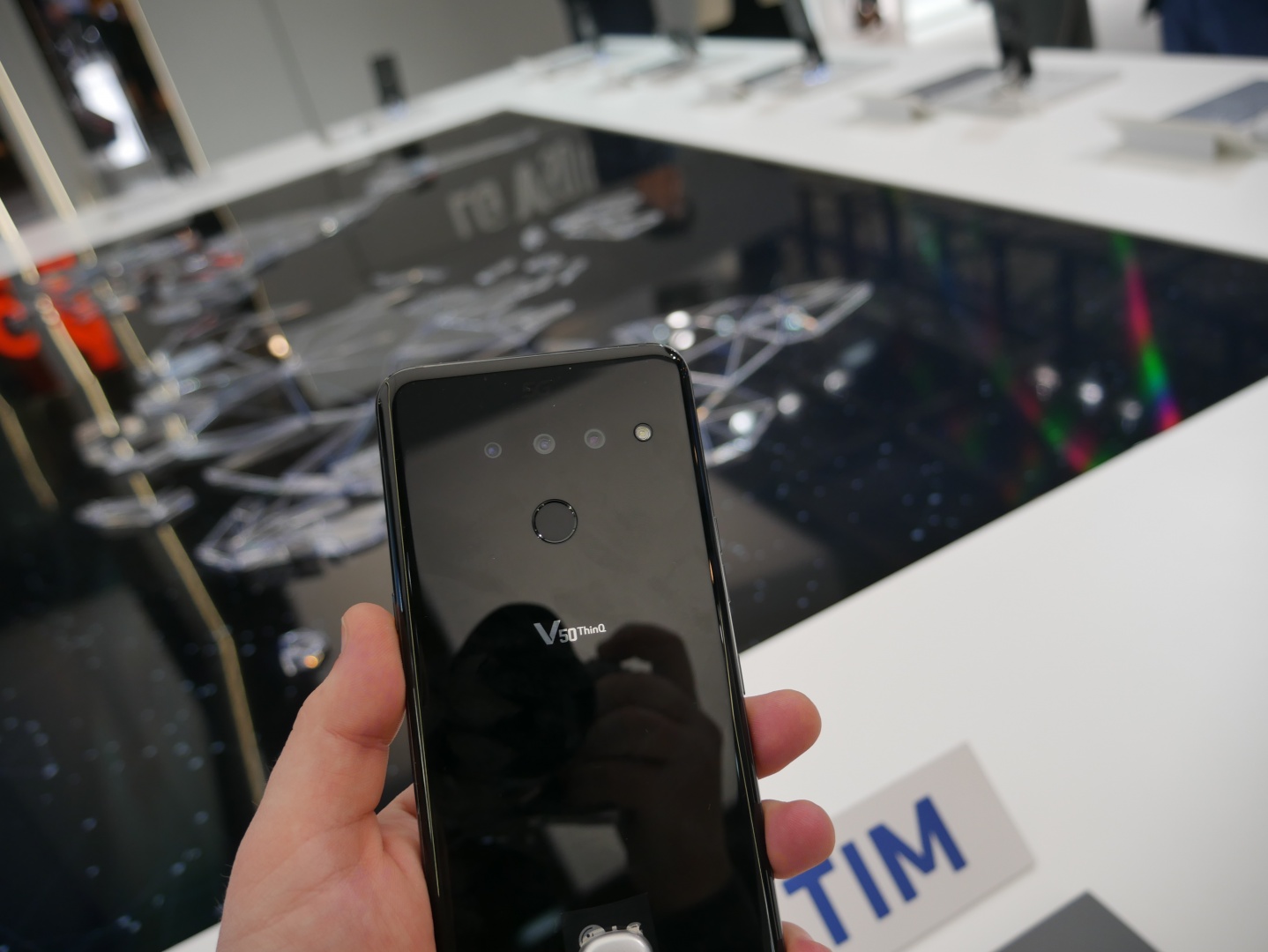 This second screen case also doesn’t have its own battery. Instead, it has pogo pins on the inside of the case that connects to the V50 and its power for the second OLED screen. Let’s hope you don’t look at a lot of white images then? 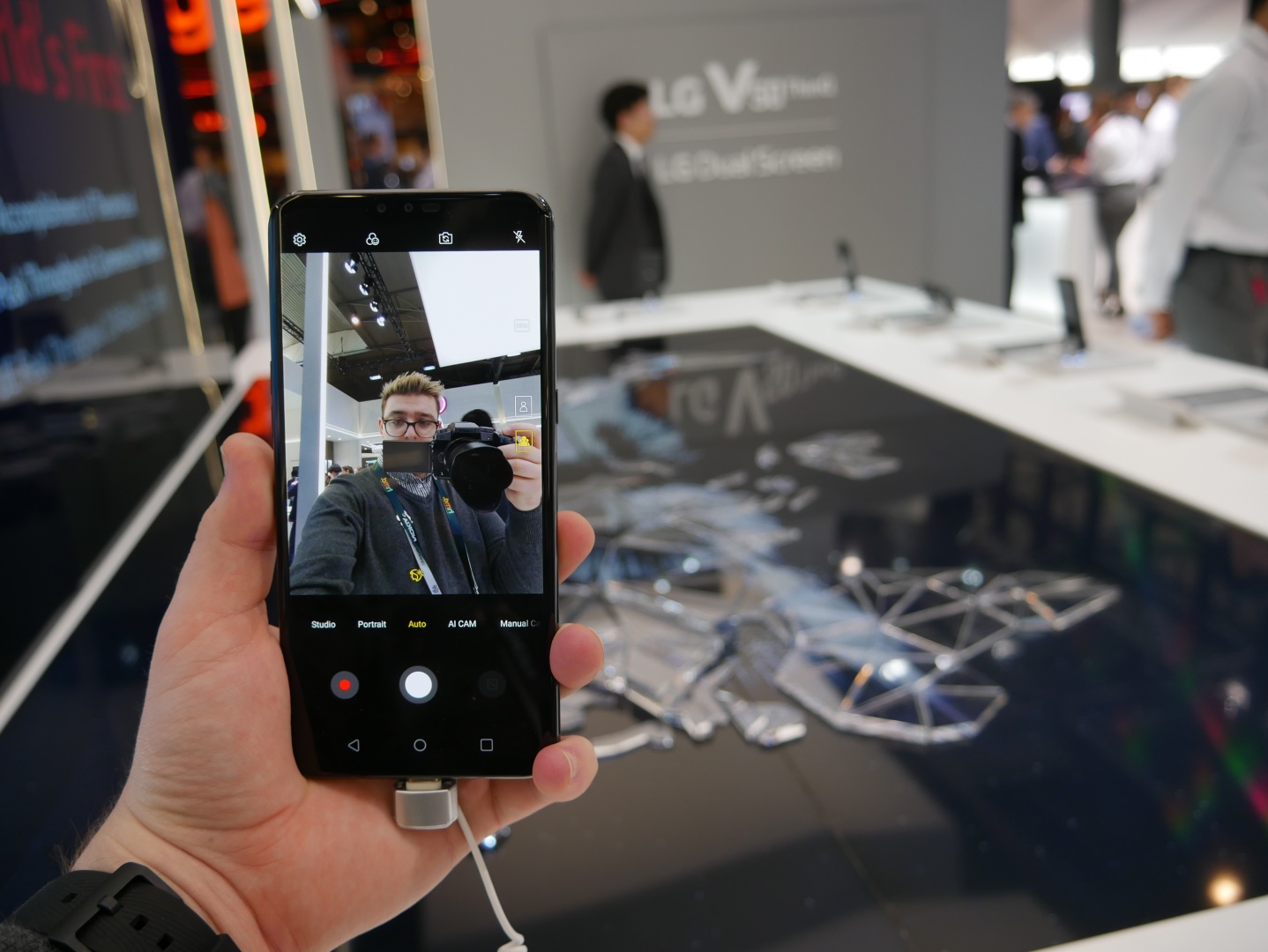 Overall, neither the G8 or V50 are terrible phones, and they do offer some new features that some might find appealing, but when compared to other smartphone announcements at MWC 2019 already, they are wholly underwhelming. LG’s idea of just putting another screen into a case and using that feels, simply, ineffectual and aged. Not everything needs to be show-stoppingly amazing, but LG needs to learn that there are some things that should probably stay in the R&D labs, and the case on the LG V50 is one of them. 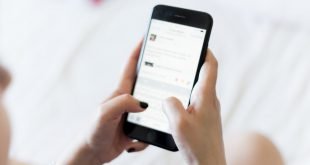