In case you didn’t know, Apple had a launch event today for a number of new devices. Here’s everything important from the event and the latest on the iPhone 7 and iPhone 7 Plus.

Let’s start with the main event – new iPhones! Apple announced two new units, the iPhone 7 which has a 4.7″ display, and the iPhone 7 Plus which delivers a 5.5″ display. Both versions will sport 32GB, 128GB and 256GB capacity options, and will come with iOS 10. The Plus will sport a larger resolution 1080p screen, whilst the 4.7″ version will deliver a 1334 x 750 resolution display. No 16GB option!

Both devices will be splash, water and dust resistant (note: that’s not proofing) thanks to the IP67 rating, and will also come with the new A10 Quad core Fusion chip.

Moving to the camera, we’re looking at a 12MP camera on the standard device with a dual camera setup on the Plus, with 12MP wide-angle and telephoto cameras, with the later capable of 2x optical zoom. Both now have OIS, and support 4K recording at 30fps and 1080p recording at up to 60fps. On the front of the device the “selfie” or Facetime camera as Apple calls it will now be a 7MP unit with 1080p recording. Apple claim the new dual camera setup on the Plus will enable the production of “accurate” bokeh effects on exposures, as well as the use of RAW images for better post-production options.

TouchID and Apple Pay are on both units as expected with the usual features and connectivity included also, along with Siri. Battery is one more area where these devices differ. The Plus will handle standby up to 16 days whilst the standard device will be a lot less at just 10 days – usage numbers are not available yet. 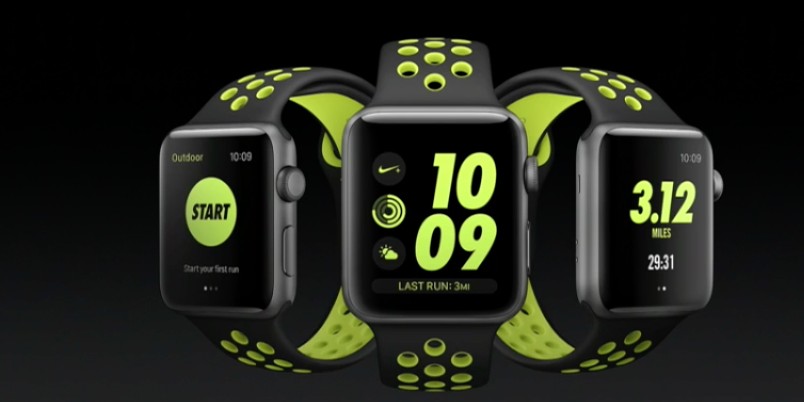 The next generation of Apple’s Watch series, Watch 2, has an improved display brightness (now 1000 nits), improved app integration with the likes of Pokémon Go coming to it, as well as delivering a built-in GPS for those who like to get out and about without their phone.

Perhaps the most divisive announcement came in the form of the headphones Apple intends you to use with your new devices. The Pods have been completely redesigned, and will be available as both wireless and wired units as AirPods and EarPods respectively. EarPods will plug into the Lightning port now the 3.5mm audio jack has been axed and the AirPods will deliver wireless streaming via Bluetooth.

Despite the fact they look like tiny hairdryers, Apple delivered a lengthy statement of their intent to make them worthy of their new devices.

The wired EarPods will set you back £29.00 although a pair will come with the new iPhone devices. whilst the AirPods will run you £159.00. Both should be available shortly.