Alcatel drops the OneTouch Branding and goes crazy at MWC

So at MWC In Barcelona on February 20th, Alcatel (Formerly Alcatel OneTouch) has announced its 2016 line up of devices and a slight re-brand. 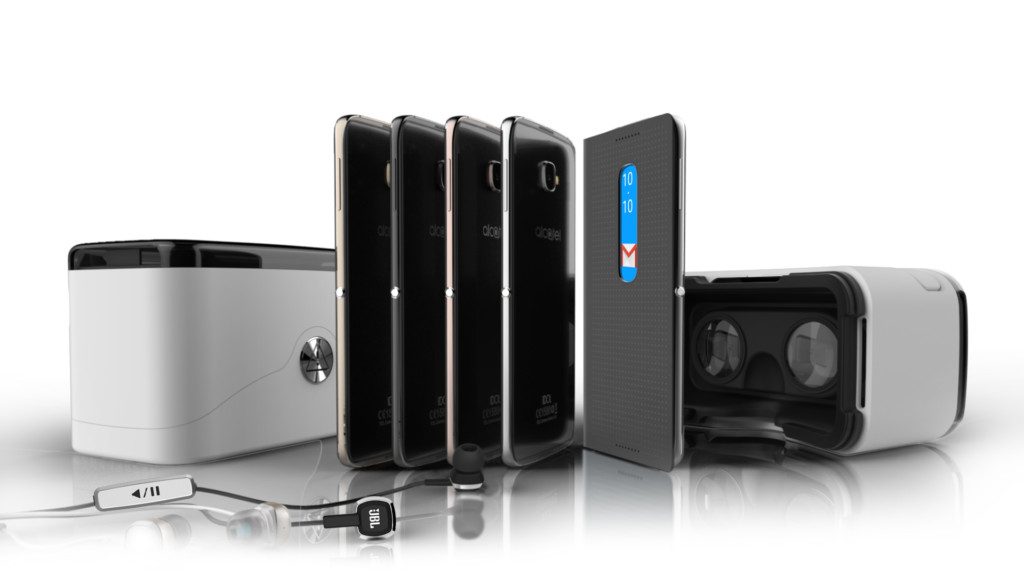 At MWC in Barcelona on February 20th, Alcatel (Formerly Alcatel OneTouch) has announced its 2016 line up of devices and a slight re-brand. Starting with the rebrand we can see that obviously they’ve dropped the OneTouch from the end, with their devices now just saying Alcatel, and their social media handles quickly changing as well. As someone who often abbreviated Alcatel OneTouch to AOT anyway, the shortening to just Alcatel is welcome and feels cleaner, and honestly more professional.

Alcatel is set to increase its engagement with its millennial fan base on social media and it’s going to continue to create fun devices at the right price points for people to enjoy for a long time. Alcatel calls this its streamlining phase. It’s streamlining its branding, its messaging, and its devices, so you get the purest best example of what Alcatel has to offer.

Now on to the devices they’ve announced today and there are three main devices, two of which are phones and the other is a tablet, so lets start with the phones shall we. The Idol 4 and Idol 4S are the successors to last years Idol 3 series. As with last year we have two screen size options, and there are spec differences between the two so I’m going to post the important ones below.

The spec sheets between the two are closer than they were last year, and we got some great new additions, the first being 802.11ac WiFi on both devices. Last year’s Idol 3’s had two different feature sets when it comes to connectivity, this year both are effectively identical, with one model supporting a few more FDD LTE bands than the other. Finally, both devices have 5Ghz WiFi! No more crowded 2.4ghz and less buffering.

Something not noted on the spec sheets is the build. Both the Idol 4 and Idol 4S have metal aluminium frames and a glass sandwich design with a beautiful spun pattern under the glass, similar to what Asus used to do with its laptops. That beautiful metal frame comes in four great colours, Silver, Dark Grey, Gold and Rose Gold, and I for one cannot wait to see them all, but I’m very excited for the Dark Grey, though I know more than a few people that’ll be very excited for the Rose Gold model.

Alcatel has put a lot of effort into telling how they focused on the sound portion of the Idol 4’s, and I believe them. After the JBL tuned speakers in the Idol 3, I’m ready to believe Alcatel with whatever they say about audio. Both Idol 3’s last year outperformed their price range when it came to audio and I see no reason why this cannot happen again with the Idol 4’s. Both Idol 4’s have dual stereo speakers – you read that right, dual stereo speakers. This means there is a set of stereo speakers on the front, and on the back there is 2x 3.6w of oomph there, and I am very excited to see what Alcatel is able to deliver. They tout the JBL and Waves tuned audio setup as being able to deliver Hi Fi class audio, and just like last year, Alcatel is bundling a really nice pair of JBL J22 in ear ear buds with every unit.

Next is the camera. Alcatel is really hyping up these cameras, but specifically the shooters on the Idol 4S. The 16mp camera on the back has an impressive setup, with Alcatel claiming its “Instant shot” is able to take a great shot at under 0.6 of a second! This is something I’ll try to test once I get my hands on one. More exciting to me is the effort they’re putting into the front camera. Both Idol 4’s have 8mp front facing cameras with 84 degree wide-angle lenses, to get all your friends in your selfies. They both also have front facing flashes, which is a feature we are seeing more and more of lately also. Lastly they both do real-time face beautification (think of Beauty mode on most Asian devices). Whilst this isn’t useful for everyone, I do know a few people who use it as a novelty or when they just want to take a nice selfie without applying any actual make up.

Lastly, the box. This sounds a lot less impressive than it actually is at this stage, that is until I tell you what the box doubles as, at least on the 4S… a VR viewer! Yes that right, the Alcatel Idol 4S comes in a box that when you’re done is able to pull double duty as a Google Cardboard compatible VR viewer, and I am extremely excited about this. As someone with both versions of glass, I have often wanted something more rigid and stable, and Alcatel is including one as a box for a phone. This is something silly, but VR, especially Cardboard VR, is kind of silly at this stage, which makes me happy – because silly is funny. 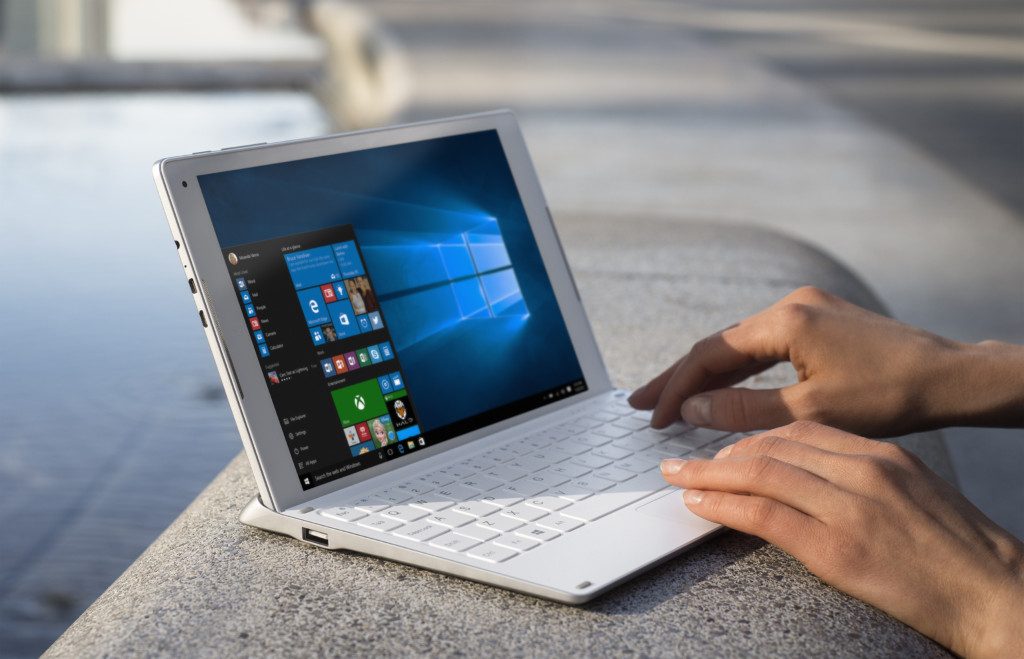 The other device Alcatel announced is the Plus 10, a 2-in-1 Windows 10 tablet with a keyboard. The Plus 10 has, you guessed it, a 10.1″ dispaly, at 1280×800 resolution, which doesn’t sound all that impressive, until you realise that scaling on windows 10 is still pretty terrible, so that is actually a really nice balance of being high-resolution enough, whilst not being too high-resolution that you have to squint. Alcatel have thrown a nice new Cherry Trail Intel Atom in there and it’s the Atom X5-Z8350, a Quad-core chip running at (they claim) 1.92Ghz paired with a respectable 2gb of RAM and 32gb of internal storage (most likely eMMC). Additionally there’s a MicroSD slot capable of supplying an extra 64gb storage, which is always nice.

But that is not it. Being a 2-in-1, the Plus 10 comes with a Keyboard dock which has a bunch of benefits. Firstly, the keyboard dock lengthens the 5830mAh battery in the tablet with the 2580mAh in itself, a combined 8410mAh battery is nothing to scoff at. If that were all I wouldn’t be so impressed, but the keyboard dock for the Plus 10 also acts as a 4G LTE hotspot, allowing you to connect up to 15 devices off of it, and this is exciting.

So we have a 10″ tablet, with a nice big battery, and a keyboard dock that brings LTE, what else do you need? Well, dual front firing speakers are always nice to have, especially when Alcatel touts one of the modes for the Plus 10 as a “dock” mode, which is where you place the tablet in the keyboard dock in reverse so it’s a stand essentially,which is just really handy. Now the Plus 10 isn’t the first multiple orientation tablet, and it wont be the last, but Alcatel has a really well put together package here, and they should be commended for that.

Alcatel haven’t given us any firm pricing details as of yet (we just know between 279 Euro and 449 Euro), but we should be looking at similar, though slightly higher prices than last year (to reflect the bump in quality and internals) and they are targeting an aggressive release in 50 countries within the next three months.

If you can’t tell, I’m very excited to get my hands on the Idol 4’s and hopefully a Plus 10 to review here, and if they’re anything like last years device, they’re going to be insta-buys.