Monitors are relatively new to MobileTechTalk, but the team are all used to using high-end displays for productivity and gaming as well as having a few duds in our purchasing decisions along the way. The Philips 328P6VJEB is, quite simply, a beast. A 32″4K beast at that. 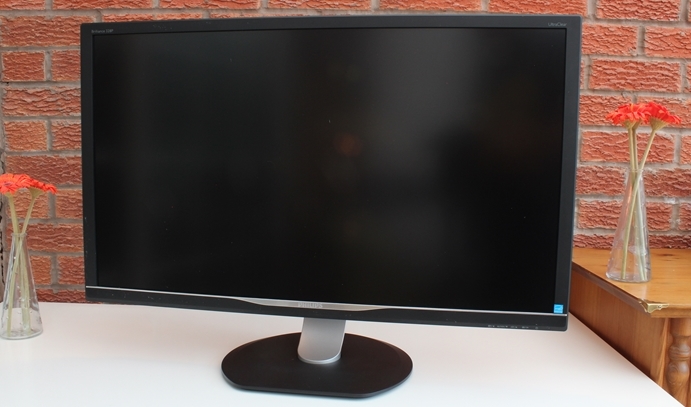 Let me just start by saying that the packaging you’ll receive this unit in is brilliant. With a panel this size, you want to know that when you purchase something like this, it’s going to be shipped carefully (fat chance!) but that even in the event you get an amateur footballer practicing with your delivery, the packaging is going to act as a last line of defence. It’s some defence. Outer hard cardboard box, inner cardboard box, two layers of hard foam with inches of space between the edges and the unit. Very good.

Let’s take a look at some specs: 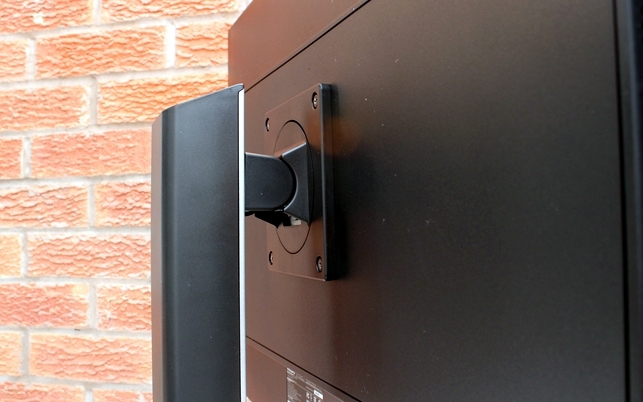 There is one thing missing from the above that I’d like to have seen; FreeSync or G-Sync technology, but alas it wasn’t included so I’ll live without it.

Putting the unit together is a doddle. There’s a base stand which has a +/- 170 degree swivel, an arm that easily fits into the base and secures with an easy screw. The arm is capable of -5/20 degrees of angling for the panel. Said panel is secured to the arm with a VESA-mount style plate with four small screws. It feels very strong. The arm also allows vertical height adjustment of up to 180mm, and a 90 degree pivot. Lots of flexibility here and very sturdy. When you work as many hours as I do at a desk, a secondary monitor for a laptop for example is crucial and the flexibility of being able to manipulate that display at will is not just desired, but necessary to mitigate against fatigue.

There’s a plethora of connectivity options here too as mentioned in the specs.

On the back underside facing down we have DVI, MHL-HDMI, DisplayPort, VGA, audio in and headphone jack options. On the side of the unit sits more ports, this time to augment your system’s ports. Four USB 3.0 ports are provided in this built in hub along with a pass through port for connectivity to your machine. One of these ports is also a ‘fast charging’ port. Perfect for smartphone charging from your monitor. No USB-C ports here though and a memory card reader is something that is time and time again missed on ‘prosumer’ units like this. The latter would be a nice touch. 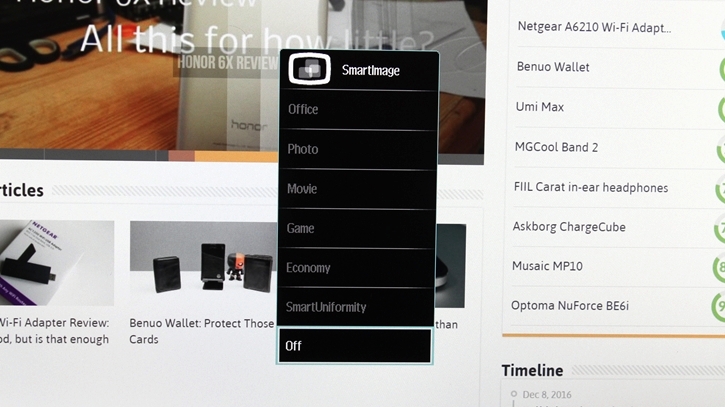 Those inputs are controlled by the OSD which has a rather old fashioned UI, truth be told. It’s functional enough though. Options for ‘SmartImage’ profiles are easily accessible via the touch buttons on the bottom of the monitor, as well as controlling PIP, audio and input settings. Once setup you won’t be using these menus often anyway, but I’d still like to see better implementations of these menus, perhaps with a hidden dial to control scrolling through menus. Hidden capacitive touch buttons aren’t the best for completing tasks like this.

Whilst I don’t own any colour gamut measurement kit, or indeed anything as rudimentary as a colourimeter that would actually have come in handy here, my eyes told me all I needed to know. Out of the box this seemed to be calibrated quite well, with perhaps a little less vibrancy than I’m used to. Easily changed via the OSD though. I spent most of my time in the sRGB mode and in this mode brightness is fixed at 100%. Changing it will remove it from that mode, and then there was some fiddling around with sharpness (reducing it) as well as some contrasts adjustments to make to make it fit my requirements.

As I don’t do any real hardcore video editing or photographic touch-ups, my use case was limited to productivity (Windows OS and a suite of apps) as well as some gaming. Gaming is where I fell in love with this unit. Playing Battlefield 1 on this at 4K (albeit I’m not including pictures of my paltry FPS due to my under-powered rig) looked stunning. Playing at 1080p was more than acceptable for me too, but this is where a FreeSync/G-Sync technology would have been welcomed.

Working within Windows on this unit was a blast too. You sit close enough at a desk to be immersed, but you can also sit back and enjoy a 4K YouTube video and still get the benefit from the crisp panel. I’ve used other UHD displays (perhaps they were just naff?) that just didn’t seem as crisp and as clear as this. 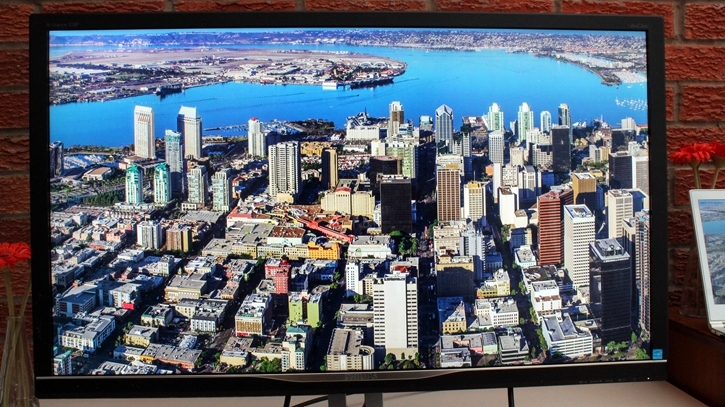 Sound quality on the unit was acceptable, but for a UHD display of this quality it really deserves some more low end, so go on, couple it with at least a 2:1 speaker setup and get some rumbling bass during those movies!

The Philips 328P6VJEB is an excellent UHD monitor for productivity at work or at home, as well as more professional applications. This monitor just makes sense! It’s the perfect size I think for a PC monitor considering the usual distance from the screen. Motion on screen in games and movies is great at high or low brightness to my eyes, and even the sound quality is acceptable if you’re not too fussed about bass levels (most are though; me included!). Gamers and professionals alike will find a use for this monitor due to its fast response time and the large real estate respectively. Good going Philips! 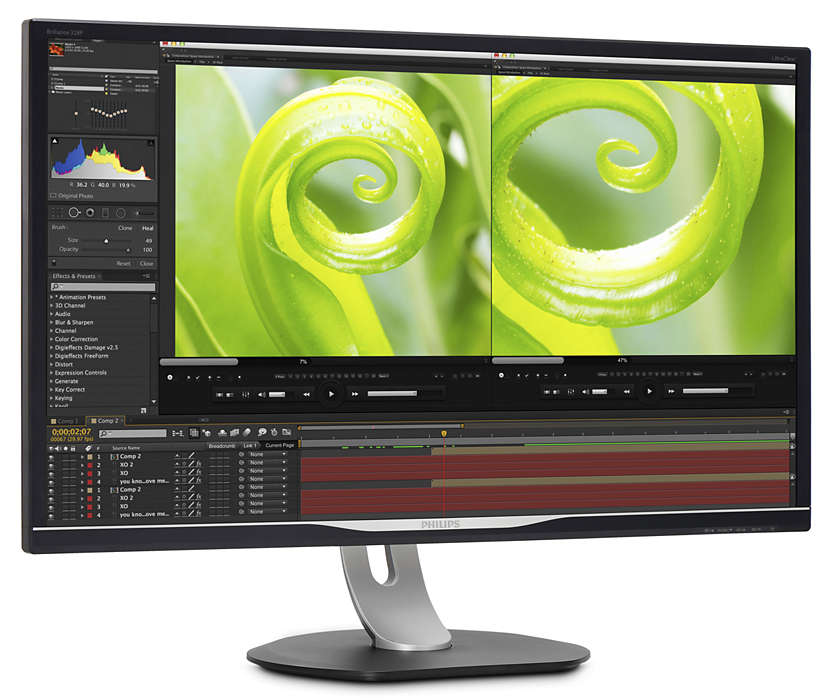