Netgear Orbi Review: Not MESHing Around

I remember a time when to get good connection to your media server from the TV in the front room meant running Cat 5 cabling around the house. Ahh, those halcyon days. More and more people are relying solely on WiFi to inter-connect their homes’ devices. A common issue is where to put the WiFi router/hub, as it seems nowhere is best for all rooms. There’s normally always weak spots or gaps. Netgear aren’t the first to try and tackle this distinctly first world problem (add your own hashtag should you require) but the Netgear Orbi system delivers. 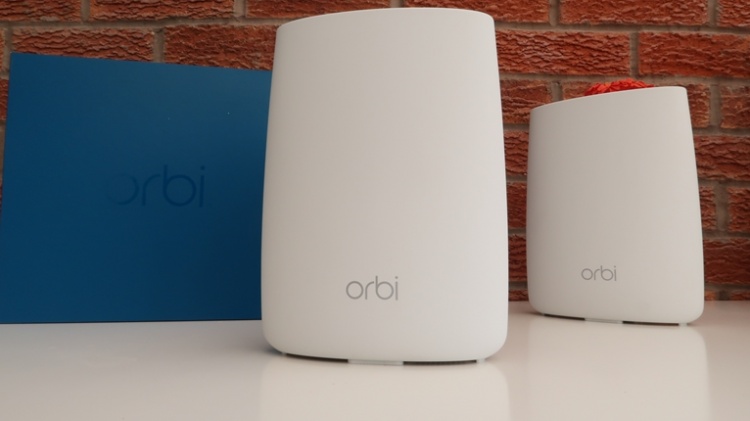 I already own a Netgear router. It’s the R7000 Nighthawk and it has served me very well for a little over a year now. I have separate SSIDs for both 2.4Ghz and 5Ghz bands and have a number of security features turned on as well as VPN access so I can get in to the network to “troubleshoot” when I’m away from home and my Wife can’t watch Law & Order!

One thing has always irked me however. Our conservatory is a little bit of a black spot. The router is on the wall in the office which is situated on the 1st floor of our house to the front. The conservatory is, as you can guess, at the polar opposite, sitting at the back on the ground floor. I can get WiFi access but it’s not speedy. I’ve used WiFi extenders as well as Cat 6 cable (as I was one of those that run them!), but if there are a couple of people in the conservatory checking their phones, TV, laptop, etc, then things bog down. What I need is a good solution for repeating the signal with little degradation. That’s what Netgear’s Orbi says on the tin.

Essentially the Orbi router and its Satellite stations connect over a secondary, hidden and dedicated 5Ghz connection to ensure that data passed from the Satellites to the Router maintain their signal strength. This manifests to the user as seamless speed no matter where they might be sitting (read: conservatory!).

Let’s take a look at what you get in the box.

The Orbi has two devices with the starter pack, but more Satellites can be added as required additionally. There is a distinct different between the two only in IO on the rear of the device with them both looking identical save for a differently coloured top to their strangely-reminisent-of-the-aliens’-craft-in-Arrival units.

For a simple explanation of how Orbi works, or at least he woolly marketing speak, check the video below.

Setting the Orbi up was actually a little easier than I expected. Network accessories have always seemingly had a mind of their own and getting to the point where a) you’re connected to the Internet and b) the relevant security is configured was somewhat of a pain. Orbi is very similar to the Netgear R7000 in terms of software so that probably helped me out.

Either way, connect the Orbi router to the WAN (Internet – usually an Ethernet cable from your providers’ device), turn it on, reboot your providers’ router, and use any wireless or cable-connected device to launch the Orbi setup process. If you connect to the Orbi network (via either method) your browser will prompt you to start the setup process. It was that painless (once I realised I should reboot my Virginmedia router first). 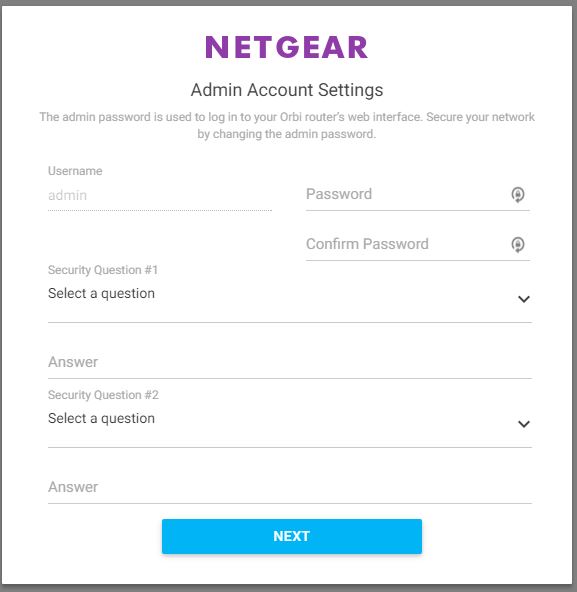 Orbi will find the best settings for your Internet connection or you can add them manually, and then you’re presented with the Admin screen to ensure that you setup a valid account. Make sure you don’t use some nonsense password here. This account is how you logon to the device that runs your network so make it secure! 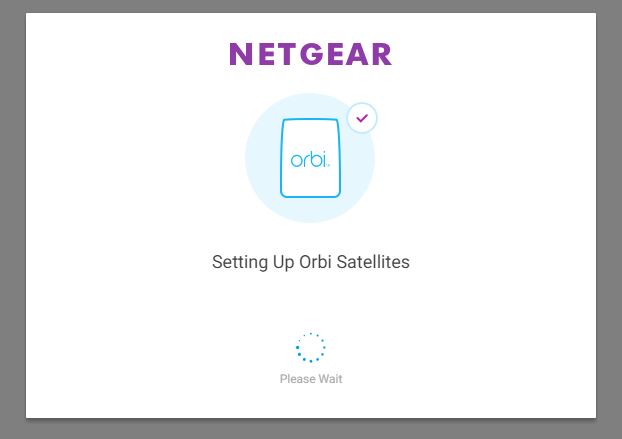 You’ll then be prompted to setup your Satellite. Simply plug it in, press “Sync” on both router and Satellite and wait for it to connect. Once connected you can unplug and move it to wherever you want it in the house to offset those pesky dead spots. Job done!

Using the Orbi is no different from using any WiFi router once it’s setup bar one specific difference. The Satellite is geared to move with you where you want coverage. For example, I setup the Satellite downstairs in our front room, but I also moved it into the conservatory when I wanted garden coverage for my devices. Perfect for a BBQ!

Moving the Satellite is as easy as unplugging, moving, and plugging back in. The device should sync itself. I did have one particular issue when I needed to re-sync the units but that was it. All other times worked flawlessly.

There are some other subtle differences that might bug some consumers, in the software. The Orbi delivers the same SSID across the 2.4Ghz and 5Ghz bands and will make the choice depending on workload, signal, device, and a number of other metrics which band to use to transmit traffic at any given time. Whilst for most that will be welcome, if you’re a particular control freak (hand up!) who likes to give separate identifiers to each band then you’re out of luck. In my testing however I noted that the Orbi managed this combination well and I didn’t notice any issues. You will occasionally see a jump in file transfer speeds if you’re looking closely when the 5Ghz band is favoured over the 2.4Ghz band when in close proximity to the router, however most people won’t be looking that closely.

Previously, using a good WiFi extender I was able to get a maximum of 19-21MBps throughput on a file transfer from Windows to Windows machines across the network. With Netgear’s Orbi, the result proved to be a little bit different. Internet speed tests now max my devices (those capable of that speed that is such as laptops and recent smartphones) at the 150Mbps (approx 19MBps) I get from Virginmedia currently. This isn’t really a good test on it’s own as it doesn’t take into account raw performance across the local network which should perform better than that.

I setup a few tests using some machines I have handy, and some simple and not overly scientific, but real world, conditions/scenarios. One thing to note here is that I was pitting the Orbi router and its roaming Satellite unit, against the Netgear R7000 in one static location. Still, it delivered the perfect illustration of why one might purchase such a unit over WiFi extenders.

Firstly, I ran a 3GB file transfer from my media server to the laptops in question; an Acer Aspire S7, and a Surface Pro 2. From the Acer and Surface Pro 2 I managed similar numbers when using the Netgear R7000 router, delivering 128Mbps each using the 5Ghz band and 72Mbps and 80Mbps respectively on the 2.4Ghz band. When using the Orbi, these skyrocketed to 320Mbps and 312Mbps respectively. A big improvement. The Orbi Satellite was situated about 4 metres from the units at the time. 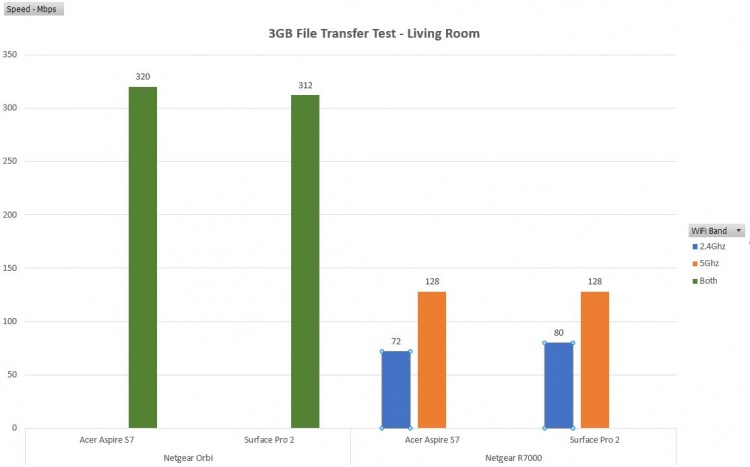 Next up was running the same tests from my conservatory, with the Orbi Satellite again around 3-4 metres from the units being tested. The conservatory is the farthest room away from the router with numerous walls and a floor inbetween. Here we saw the Acer and Surface Pro 2 struggle to maintain a connection, and the 3GB file provided 56Mbps on the 2.4Ghz band and 64Mbps on the 5Ghz band on the Acer, whilst the Surface Pro 2 managed just 32Mbps on both. Bring in the Orbi router and Satellite however and we’ve got 312Mbps and 304Mbps respectively. A similar result to the living room, but a proportional leap from the Netgear R7000 use. 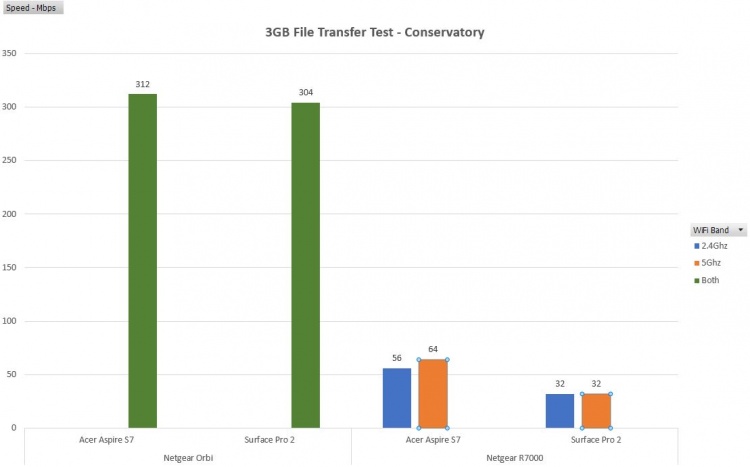 Finally, I decided to test these units up close and personal, just 3M from the routers themselves. The result was just as I’d expected. Better results for the units on the Netgear R7000 than the previous tests, but still blown away by the Orbi which managed 328Mbps and 213Mbps for the Acer and Surface Pro 2. 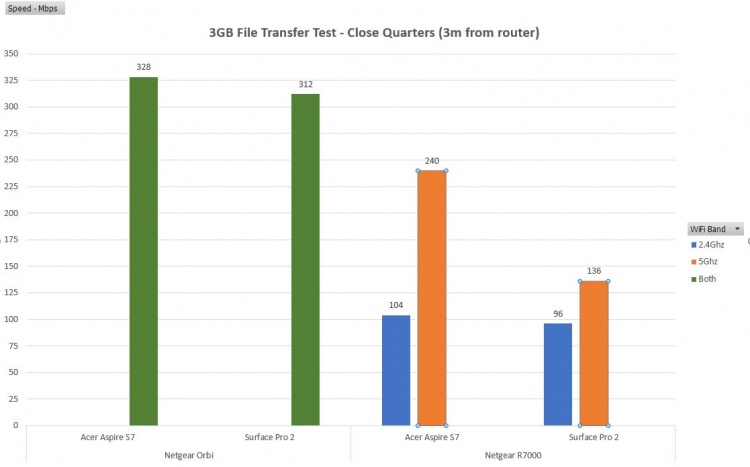 One final test didn’t involve the WiFi radios at all, but instead the 1GB network interface ports. I, like many enthusiasts, make use of ethernet across their local network and I just wanted to test how this operated. It was closer than the WiFi results, but the interface in the Orbi won out delivering just over 860Mbps in a local network speed test. 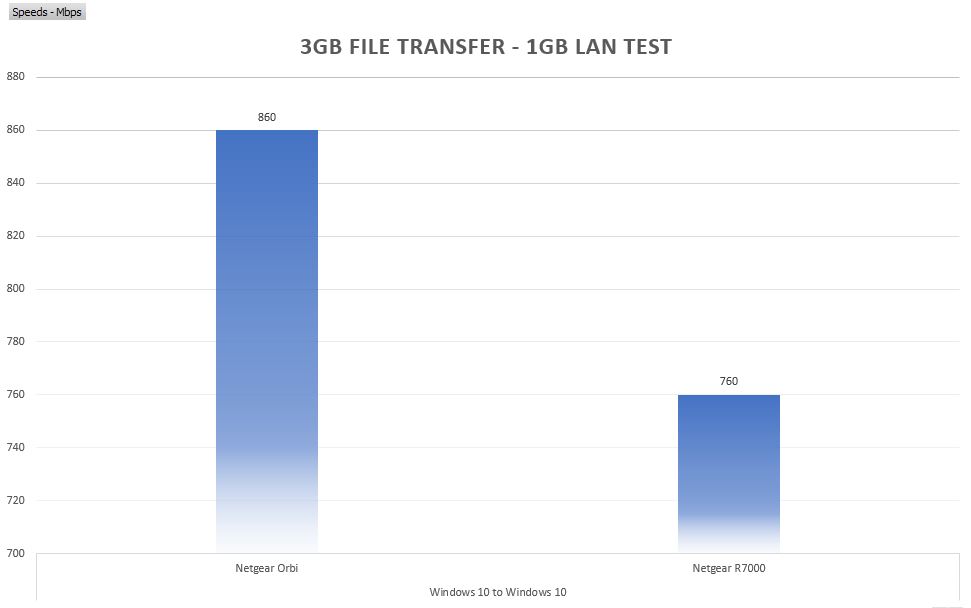 With the speeds out-of-the-way I started poking around the other settings to see what else was new. The truth was not much over the Netgear R7000. VPN deployment, QoS, parental controls, USB sharing, etc are all available on the Orbi and are all similarly functioning. I make use of some but not all, however it’s always nice to have the option.

A note of caution however. The integrated firewall, whilst better than nothing, is not a replacement for local AV use. I know many individuals that simply don’t run AV on all the machines that access their network, and expect their firewall to deliver the job. I won’t get into the merits of end-point protection alongside gateway protection and the nuances within, but simply put, use AV everywhere, and use the firewall on the router – it’s still not enough, but for personal use, it is better than nothing.

So, to the crux of the matter. I can’t remember when I haven’t had to sit down for half a day to re-plan the network when switching out a router before. Granted it might be that the same manufacturer and same software helped me out here, but given that this unit is aimed at the “Apple” generation of consumers; those who simply want to buy an off the shelf product, turn it on, and expect it to work, I have to give Netgear some points here. The Orbi does just that.

Performance wise it’s not the fastest Tri-band offering out there, but for my use cases it’s more than acceptable and the proportional speed increases in my testing, for my local network use bear that out.

There is just one little snag. It costs £370 to get on this bandwagon. I used to think the £120 I paid for my Netgear R7000 was expensive, but £370 is a little steep in my opinion. Granted you’re getting two units, which for most moderate households should be enough, and if you are sharing a house then splitting that might not be too much of a pain, but it is a steep entry point for those just wishing to get their WiFi in all their rooms. Running cabling is still infinitely cheaper here but hell, you’ll no doubt want to put some access points on the end of that anyway which is going to bump the price up.

The more you stop and think about it, the more and more you can talk yourself into buying one of these, if the price drops a little. There is definitely value to be had here and those that do stump up the cash won’t be disappointed by its performance orbi its cool aesthetic (see what I did there? It nearly worked right?). 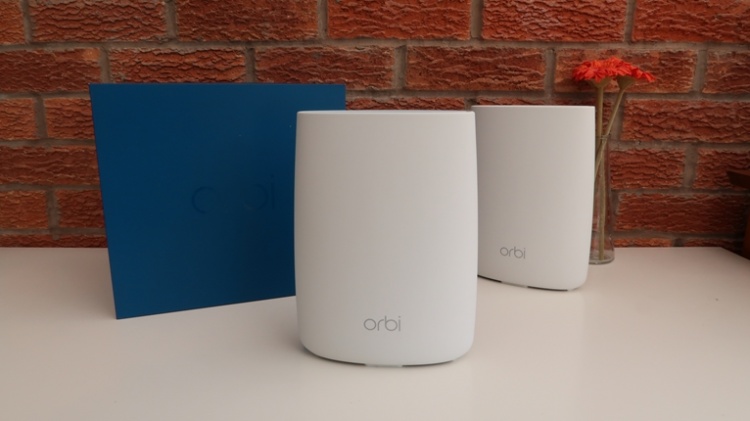