KitSound has some brand recognition in the mid-tier of audio peripherals with headphones, speakers and audio cables being their staple products. In the Comet, their first, and only independent wireless ear bud offering, KitSound look to compete in the market with the likes of Jabra, Jabees and many, many others all attempting to deliver a budget option for those consumers who can’t or won’t fork out for the Apple AirPods. Let’s take a look at how the KitSound Comet ear buds stack up. 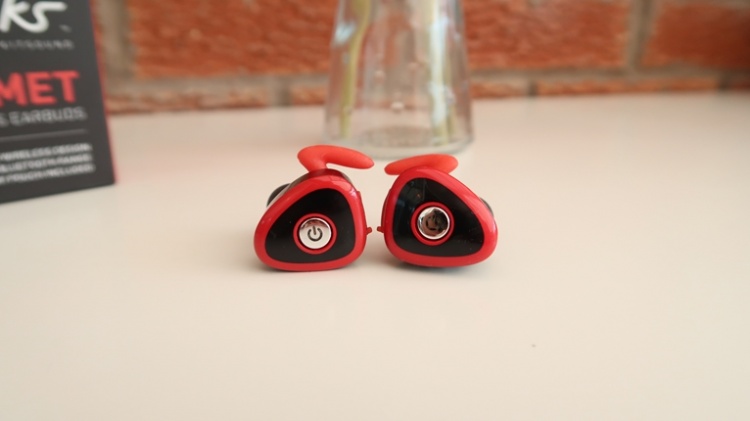 First off, let’s take a look at just why these types of ear buds are now a thing. Apple, you may have heard of them? Well, they decided that, many years after everyone has been delivering Bluetooth headphones, that they would deliver their own wireless offering in the form of the Apple AirPods at the iPhone 7 generation launch. These AirPods are still retailing for £159. Whilst Bluetooth headphones had been largely accessible way before this, this was the first time Apple had weighed into the mix and as such, interest was piqued.

Fast forward and there are now numerous companies all delivering their versions of independent wireless ear buds but at a fraction of the cost. Some are good, some are terrible, and some a really quite great for the price.

Let’s start with the unboxing. In the box come the KitSound Comet ear buds of course, as well as two other sets of silicon buds (small and medium, large attached), a microUSB cable for charging, a small carry bag and a quick start guide. Nothing abnormal there.

These things are tiny. Not as small as others I’ve reviewed but these incorporate an ear hook into the ear bud design. That ear hook is silicone and is accented in a scarlet red whilst the rest of the ear bud is a glossy black plastic finish. On the outside of each bud is a power button, again with red accents. On the front is a small pinhole microphone. The finish feels quite cheap, but looks acceptable. Also, on the backside of each unit is a covered microUSB port for charging.

In terms of fit and comfort, I was very glad of the additional silicone tips on these units as my ears are far from symmetrical, and I needed to use the large tip on one and the small on the other to get a decent fit. The ear hook helped on one side, but again, as my ears are obviously quite a different shape inside, the ear hook on the right didn’t latch on to the part of the ear it needed to, to secure the unit. Others haven’t had this issue when I asked them to test so there doesn’t seem to be a lot to worry about there – blame my DNA! 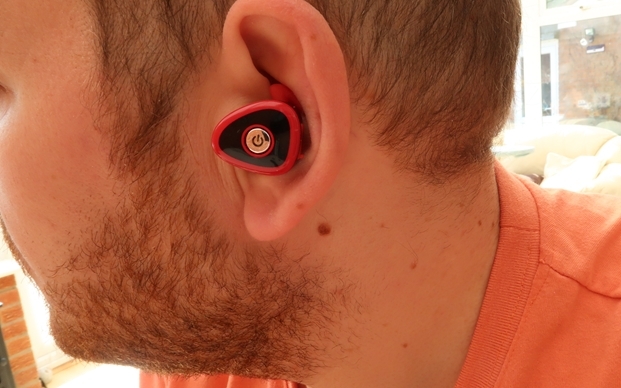 However during this fitting process it became clear that the ear hook is static. There is no dynamic movement; no pivot, no rotation. The only movement comes from the end piece of the silicone hook bending into place. I’d have liked to have seen replaceable and different sized ear hooks here also to help ensure a fit for all consumers.

Controlling the KitSound Comet buds was easy enough. Pairing them both together was as easy as turning them on and holding the multi-function button down on both to sync. Then do the same on one ear bud to start pairing with your device. Simple. The multi-function button is used to play/pause the music, and to make and receive calls. There is no volume control here sadly.

The volume control isn’t going to be an issue but, for some, the general audio performance is. If you’re a bass head, look elsewhere as there is next to nothing in that department from the 8mm drivers. Frankly, I wasn’t expecting too much in the low-end from the KitSound Comets however, the other independent wireless ear buds I’ve reviewed have all performed better in that particular test than these. Mids and highs are crisp and clear, but sound a little tinny in the absence of any bass (at all!).

There’s next to no noise bleed from these which is good for commuters, but they don’t have the best isolation for the user which is bad for the commuter. A bit of a dichotomy there. Audio isn’t bad, it’s just lopsided and basic. If this was the first set of ear buds like this I’d reviewed I might give them a pass due to their Lilliputian-stature, however unluckily for KitSound, they aren’t, so they don’t.

Connectivity I’m happy to report was good however with a phone in my pocket not causing these units any issue at all in terms of preserving a constant stream data. This is where a lot of cheaper units fail and I’m glad I don’t see this here.

Ahh, battery. Battery life on ear buds and Bluetooth headphones alike are often very good. The included 50 mAh battery in each bud is good for around 3 hours in my testing (streaming music only from a device never more than 10m away). That’s not terrible in terms of the use case that these might be used for, however the drawback here is the charging mechanism. Whereby the Apple AirPods and other wireless ear buds have a charging cradle, you’ll be connecting each one of these buds independently until fully charged, which will take around 90 minutes for each bud (or if you charge both at the same time, then 90 mins in total). That irked me somewhat, but it might not others.

I want to love these. They are relatively cheap in comparison to alternatives at £39.99, have a small footprint, and decent in-use battery life.

However I just can’t. The charging mechanism is at odds with the design, the 8mm drivers deliver no low-end at all, and the fit, for me, was stunted by the complete lack of any configuration of the unit’s ear hook. Granted that last bit might not bother others, but it will bother some, and as the design change is tiny, I’m upset they overlooked it. Simply don’t glue down the silicone wraparound gook, and allow it to move. That’s all you needed to do KitSound!

Objectively, I can’t in all conscience suggest you stump up the £159 for the Apple AirPods which will definitely give you a much richer sound, as the two price points simple aren’t comparable. However, I would suggest checking around the MobileFun website for alternatives (hint: check out the Syllable D900 Mini for just £10 more and read our review of them here) if you value your bass.

In areas, at best they are average and at worst they are poor. It just wouldn’t have taken KitSound much to turn them into something at least good which is why I’m inclined to suggest looking elsewhere. 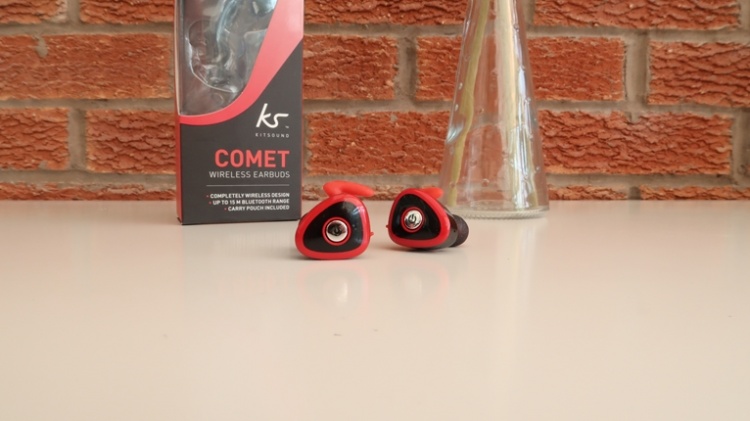