We’ve reviewed the Xiaomi MiBand, original and Pulse (2), as well as the MGCool Band 2 more recently in the search for the best budget fitness tracker to help me start 2017 with a bang. Whilst the fitness regime has started well, I’m still searching for a product that has a great mix of basic functionality, stability and price. Is the igotU QBand HR the new budget fitness king? 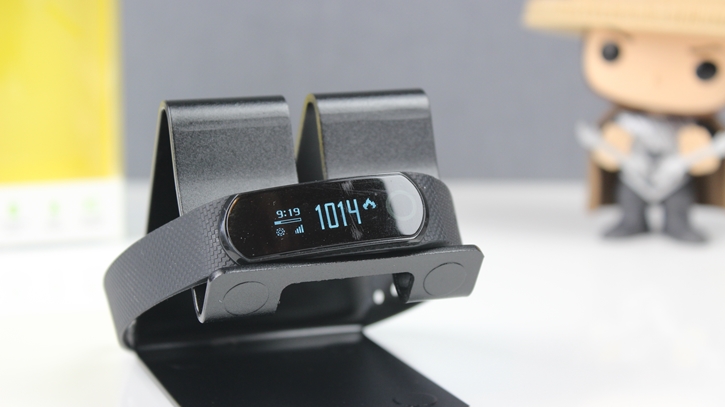 I know nothing about this brand other than they sell a number of fitness bands and smart watches with varying components and price points. They’re all relatively cheap so we might pick up a couple of other items to test as well.

The igotU QBand HR (model Q-66-HR) is a small Xiaomi MiBand/Fitbit style device with a control pod docked into a band. Nothing new there, the aforementioned Xiaomi have experience in this market as do a plethora of other Far East manufacturers. There’s always something missing though. It might be poor step counting, lack of heart rate monitor or lack of continuous heart rate monitoring under exercise, or perhaps some sensors such as GPS? The igotU QBand however has most of what I wanted to use on a regular basis covered.

Let’s start with the box contents as there are a few surprises in there.

Along with the control pod which is in essence the igotU QBand HR for all intents and purposes, comes a spare band (black and cyan provided), as well as a manual which is actually quite in-depth and a strange but functional charging cradle.

The specifications are relatively modest:

Opting for the black band to keep it as neutral as possible, I went to fit the device for the first time. My first experience was not particularly one of unbridled joy. The band felt cheap, rough plastic rather than the silicone bands I’m used to seeing on similar products. Nevertheless, it fit well all the same and I embarked on my journey to discover its functionality.

The band is held in place with an equally cheap looking and feeling plastic pin through the band with the control pod fitting into the gap and resting on the topside of the wrist (by design). 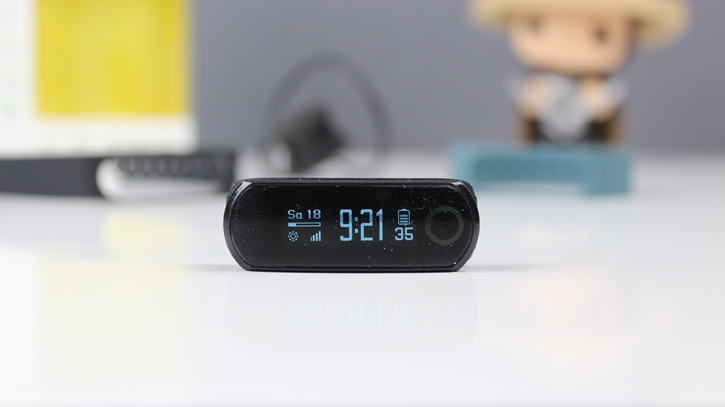 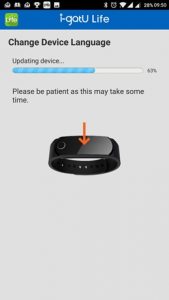 In order to setup the band, first download the relevant app from the iOS or Android app stores and install. Enable Bluetooth, and connect from within the app, and then just follow the wizard. This took about 15 minutes the first time due to some disconnections and firmware upgrades. Once done, you’re good to go and have a play with the functionality and synchronise to the app.

As you can see, the igotU QBand HR has only one button on the control pod, a capacitive round button which is used to cycle through the steps, calories burned and heart rate monitor, and that’s just on the “daily” mode. Long pressing the button brings up the mode selection screen which can be cycled through. Daily, Sleep, Sports and Nap modes all give contextual information about those activities.

Pairing with the companion app allows simple yet important settings such as “auto sleep” scheduling for the sleep tracking to kick in without being manually told (although that’s possible too) as well as daily goals and target weights in the profile section. You can then get into the likes of notification setup as well as a vast amount of other settings within the app. It’s not the prettiest UI and does look dated but it gives the functionality which is what I was after.

So, exactly what is that functionality? Well by default, the band delivers notifications for phone calls, SMS, email, as well as a selected social networks. Don’t fear, if your app isn’t conventionally supported, you can add it to the “custom apps” section and get notifications (vibrations) that way. All seem to work well with the only issue being that there are no swipe gestures to dismiss or read more of a notification. It does what it says though; it lets you know to check your phone.

Moving on the igotU QBand HR gathers sleep data as well as utilising the GPS in the tethered smartphone to record runs or walks. Calories burned and heart rate are also tracked along with the usual steps. The heart rate functionality is interesting however as it can be manually requested, as well as becoming constant during a selected workout, something most bands at this price range completely fail to deliver. Finally, it’s IPX7 water resistance as well as having Google Fit integration. That’s a lot of functionality for £39.99 isn’t it? This doesn’t take into account the social sharing within the app and the data collation the app manages via a dashboard that too can be customised.

All this functionality is great but if it fails in build quality or in delivering the functionality consistently then the product is a no go. Thankfully it manages the latter very well with the former, build quality, being acceptable.

The dual function single button took a little getting used to but it quickly becomes second nature. It’s not the most responsive capacitive button I’ve ever used though so you do have to ensure you give it some pressure to make sure you get the desired result. Similarly, the display itself isn’t of a resolution that would have the big players scrambling for their R&D department to up their game. It’s simplistic, and to the point without any flair. That’s fine by me!

The lack of any touch functionality is somewhat of an oversight, but completely in line with the price point-to-functionality juggling act. There’s no swiping away notifications of scrolling with a flick of the finger. All input is via that one button. The screen itself is a paltry 128 x 32 pixel OLED display and the coating seems plastic rather than glass. After a week or so of testing I’d already got a couple of scuffs from an abrasive material showing. It’s not the highest quality piece of manufacturing. Again, that price point is a tell-tale sign of this.

Battery life is stellar with the suggested “up to 10 days of fitness tracking” being easily surpassed. Perhaps they mean up to 10 days of continuously using the heart rate monitor? After the first week of testing the unit was sitting at 3 out of 4 bars on the display. Unfortunately there isn’t actually a battery percentage that I’ve found, but even if this is 75%, that suggests a month without charge using the standard functionality such as sleep tracking and the occasional workout. That’s great! When it does come to topping the 90 mAh battery up you get to use the included charger. An indication of the wallet friendly price point are the plastic flecks similar to those that used to be left on Airfix models when the pieces were pulled away from the scaffold are visible.

Simply take the band off, rest it on the cradle, clip it in securely to ensure the charging pins line up to the band, and then plug into a USB port to start charging.

The igotU QBand HR is a device I’m slowly falling in love with. It’s certainly not perfect and the shady build quality would bother me if the rest, for the price, just wasn’t so bloody inciting. As I mentioned at the top of this review, functionality for me is key. Nuanced settings (I’ve still not tweaked them all!) as well as control over the sensors and tracking via the companion app are priority number 1, and this band just delivers on that score. Comparatively I’m yet to use a sub-£50 device that has as many settings and configurations as this, and it’s actually delivering when I set it to work.

For me, it’s replaced my Xiaomi, MGCool, LG G Watch R and Honor Z Band as as a better option for my fitness tracking needs. A few refinements such as a Gorilla Glass coating on the display, perhaps a touch layer to it or physical button, and an overhaul of the App skin, and it’d be close to perfect for my needs. It’s about 90% of the way there to be fair. Highly recommended based on my use case! 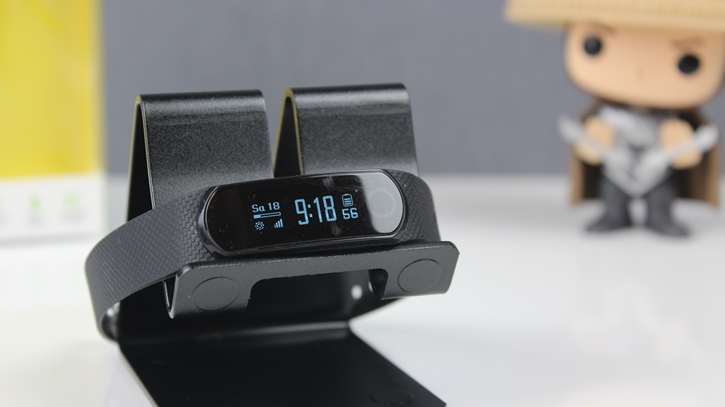